Igneous rocks contain many minerals. Various natural minerals having a wide range of different distinctive character­istics are available. But only a few of them form the bulk of rocks. These minerals are called the rock-forming minerals.

Following are the commonly found Rock minerals in igneous rocks: 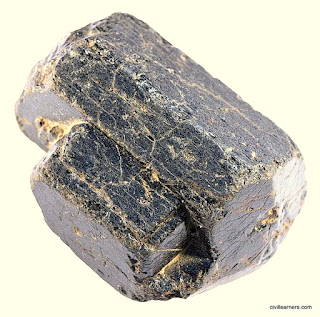 This mineral resembles hornblende. It forms octagonal crystals. It changes to chlorite by hydration. 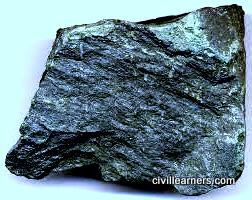 It has a green colour. It is mainly derived from the decomposition of augite, biotite and hornblende.

It has many varieties, the common being that of ortho­ class, Microline and one or other member of the plagioclase series. Orthoclase is whitish, greyish or pinkish in colour. It is a straight-splitting mineral. It shows the development of tabular crystals. It has usually well-defined faces. Presence of decomposed rocks sometimes imparts cloudy appearance to this mineral. Rocks disintegrate easily if orthoclase is in abundance in their structure. Microline has deep green or flesh-red colour. It is found along with orthoclase. 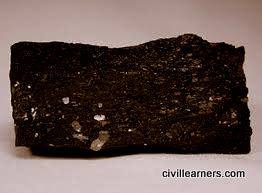 This mineral is heavy, strong and durable. Its colour is dark-green or black. It has a glassy lustre. It frequently occurs as six-sided crystals having the appearance of elongated hexagons. It changes to chlorite when exposed to the weather. 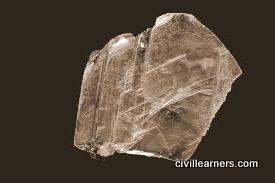 It occurs in thin transparent laminae or plates. Layers of mica shine with a metallic lustre. The hardness varies from  2 to 3. Two forms of mica commonly occurring in igneous rocks are muscovite and biotite. They occur separately or simultaneously.

Muscovite is also known as white mica. It has a light colour and it may be colourless, when available in thin layers. Its density varies from 2.76 to 3.10 g/cubic meter.

Biotite is also known as black mica. It has a dark colour and metallic lustre. It contains iron and hence when exposed to climatic condition or weather, it changes to chlorite and loses its
elasticity. Its density varies from 2.80 to 3.20 g/cm3

It has a black, olive-green or yellow in colour. It is colour­ less when found in thin sections. It frequently changes to serpentine.

For better Understanding Watch the video below: 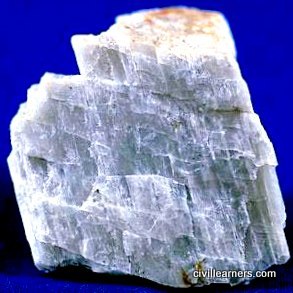 It is the crystalline form of silica. It is usually colourless. But it may he sometimes brownish, pink or yellow in colour due to presence of metallic oxides in small quantities. It is weather-proof and resists the attack of acids with the exception of hydrofluoric acid. Its density is 2.65 g/cm3  and its hardness is 7. It may be noted that common sand 1s a variety of quartz. 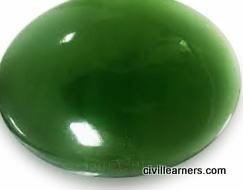 This mineral resembles chlorite. It has a pale-green or yellow colour. It presents a massive appearance. Sedimentary rocks also contain many minerals.

Follow­ing are the commonly found Rock minerals in sedimentary rocks:

This mineral rarely occurs in igneous rocks. But it is the chief constituent of many sedimentary rocks. Calcite is calcium carbonate CaCO3 and it gives out carbon dioxide when attacked by mineral acids. It is generally colourless. But the presence of impurities may give it a yellow, brown or red colour. It is available in various shades.  It is poorly soluble in water and it reacts vigorously with acids. Its density is 2.70 g/cm3 and its hardness is 3.

It deteriorates in water containing carbon dioxide CO2 since calcium bicarbonate Ca(HCO3) 2 is formed and it is about 100 times more soluble in water than calcite.

This mineral occurs rarely in nature and its chemical composition is MgCO3  It is harder and less soluble than calcite.

It is available in various shades. Its crystals are brittle.  It is, however, heavier and stronger than calcite. It is insoluble in ordinary water. In chemical composition, it is bicarbonate of magnesium and calcium, MgC03·CaC03.

This mineral has no definite crystal form. Its colour varies from yellow to green. It is practically insoluble in acids as well as ordinary water.

It has an earthy appearance. Its colour varies from yellow to reddish-brown. It is insoluble in ordinary water.  But it dissolves in acids 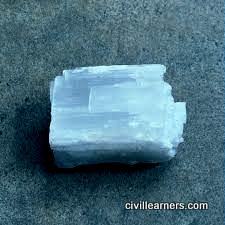 It is the hydrated sulphate of calcium with chemical composition as CaSO4, 2H2O. It is white, when in a pure state. Due to the presence of impurities, it is tinted into grey, reddish, yellowish or black colours. Its density is 2.3 g/cm3 and its hardness is 2. It is a crystalline substance. Its solubility in water is very poor.

This is an anhydrous variety of gypsum and its chemical composition is CaSO4 • Its colour varies from reddish-white to grey. Its density varies from 2·80 to 3·00 g/cm3 and its hardness varies from 3.00 to 3.50. If it remains in contact with water for a long time, it is converted into gypsum with a slight increase in volume.

Conclusion: I hope that my friends have completely understood Rock-forming mineral If liked the post plz share to your loving friends, Thank u. “Sharing is Caring” For more info Read😊😊
Do follow us on all social media platforms for Knowledge and Subscribe to our Website and Turn on the notification bell for knowledge