The defects occurring in the timber are grouped into the following five divisions:

1) Defects due to fungi: 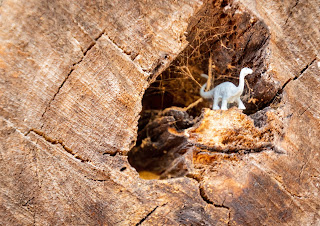 The fungi are minute microscopic plane organisms.
Following defects of timber are caused in the timber by the fungi:

The term rot is used to indicate the decay or disease of timber. The fungi of certain types feed on Wood and during feeding, they attack on wood and convert it into dry powder form. This is known as dry rot.

The dry rot occurs at places where there is no free circulation of air. The fungus rapidly dies on exposure to air or sunlight. The unseasoned softwoods and sapwood are easily attacked by dry rot.

The dry rot may be prevented by using well-seasoned timber free from sap.

When part of the timber is seriously affected by dry rot, the damaged portion may be completely Removed and the remaining unaffected portion should be painted with a solution of copper sulphate.

When timber is subjected to alternate wet and dry conditions, decomposition of its tissue Takes place and the timber is said to have been attacked by wet rot. The attacked part of timber gets Reduced to a grayish brown powder Standing tree or timber exposed to rain is subjected to attack

Wet rot can be avoided by the use of well-seasoned timber treated with preservatives.

The fungi of certain types remove cellulose compounds from wood and hence the wood comes brown in color. This is known as brown rot.

The fungi of certain types of attack wood and the wood become a white mass consisting of cellulose compounds.

This is formed when the heartwood is exposed to the attack of atmospheric agents. Due to this, the tree becomes weak and it gives out a hollow sound when struck with a hammer.
The fungi of certain types do not bring about the complete decay of timber. But they feed on cell contents of sapwood and the sapwood loses its color. This is known as the sap stain and it
generally occurs when moisture content goes beyond 25 percent or so.

The sap of wood is stained to bluish color by the action of certain types of fungi.

2) Defects of timber due to insects:

Following are the insects which cause the decay of timber: 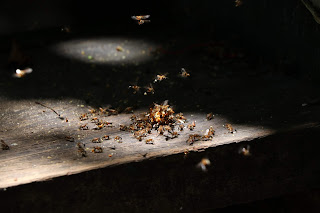 These are popularly known as the white ants and they are found in abundance in tropical and sub-tropical countries. These insects live in a colony and they are very fast in eating away the wood from the core of the cross-section.
They make tunnels inside the timber in different directions and usually do not disturb the outer shell or cover.

These are small insects and they cause rapid decay of timber. They form pin-holes of size about 2mm diameter in wood. They attack the sapwood of all species of hardwoods.

These are generally found in salty water. Most of the varieties of marine borers do not feed on wood. But they make holes or bore tunnels in wood for taking shelter

3) Defects of timber due to seasoning:

Following defects occur in the seasoning process of wood: 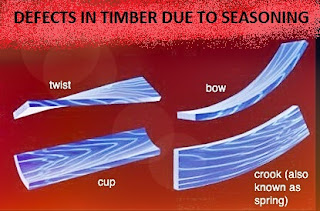 This defect is indicated by the curvature formed in the transverse directions transverse direction of timber.
The exposed surface of timber dries very rapidly. It therefore shrinks. The interior surface which has not completely dried is under tension
case-hardening and it usually occurs in timbers which are placed at the bottom during seasoning.
A check is a crack that separates fibers of the wood. It does not extend from one end to the Checks Surface checks: Shallow cracks extending along the grain on the face or cage.
Due to uneven shrinkage, the wood sometimes flatters during drying. This is known as the collapse
Due to stresses developed during drying, the various radial and circular cracks developed in the interior portion of timber. The timber thus assumes the honey-comb texture and the defect so developed is known as the honey-combing.
These are radial cracks.
When a check extends from one end to the other, it is known as a split.

When a piece of timber has spirally distorted along its length, it is known as a twist.

When a piece of timber has twisted out of shape, it is said to be warped

4) Defects due to natural forces: 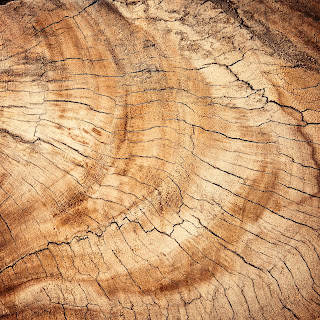 These formed when a tree has received shock or injury, the growth of the tree is completely upset and irregular projections appear on the body of timber.

It indicates soft tissue or skin which covers the wound of a tree.

The wood is sometimes discolored by the chemical action caused by some external agency. This is known as the chemical strain.

If a tree grows rapidly, the annual rings are widened. It is known as coarse-grained timber and such timber possesses less strength.

The timber which is obtained from dead standing trees contains dead wood. It is indicated by lightweight and reddish color.

This defect is indicated by white decayed spots that are concealed by healthy wood. They are probably formed for the access of fungi.

This defect is indicated by red or yellow tinge in wood or reddish-brown strain or spots round the pith of tree discoloring the timber. It is caused either due to poor ventilation during storage or
by the commencement of decay due to over-maturity or due to the growth of the tree in marshy soil.

These are the bases of branches or limbs which are broken or cut off from the tree. The portion from which the branch is removed receives nourishment from the stem for a pretty long time and it ultimately results in the formation of dark hard rings which are known as the knots. As continuity of wood fibers is broken by knots, they form a source of weakness.

The rind means bark and gall indicates abnormal growth. It is an irregular growth cause the fibers on wound fell after the branches have been cut off in an irregular manner.

These are cracks that partly or completely separate the fibers of the wood. The following are the different varieties of shakes.
Cup shakes
Heart shake
Ring shake
Star shake
Radial shake

5) Defects due to conversion

During the process of converting timber to the commercial form, the following defects may occur:

This defect is indicated by the marks or signs placed by chips on the finished surface of the timber. They may also be formed by the parts of a planning machine.

This defect is formed due to improper sawing of timber. It is indicated by a diagonal mark on the straight-grained surface of the timber.

This defect is caused when a small depression is formed on the finished surface of timber by falling of a tool or so.

This defect is denoted by the presence of the original rounded surface on the manufactured piece of timber.

The timber is said to be decayed when it so deteriorates that is, loses its value as an engineering material.

Following are the various causes or situations which favor the early decay of timber:
1. Alternate dry and wet conditions.
2. Bad storage or stacking of timber.
3. Fungi which are responsible for developing diseases in timber such as blue stain, brown rot, dry rot, heart rot, sap stain, wet rot, and white rot.
4. Improper seasoning.
5. Insects such as beetles, marine borers, termites, etc.
6. Keeping timber in contact with the damp walls, damp earth, etc.
7. Shocks or impacts received during young age from natural forces such as fast blowing wind, etc.
8. Use of timber without taking out sapwood from its structure.
9. Using seasoned timber without applying a suitable preservative on its surface.
10. Using unseasoned wood with the application of a protective coat of paint or tar.
Also read: conversion of timber

2 thoughts on “Defects of timber | Decay Of Timber | Prevention”

In this blog site You will find Important topics related to civil engineering in an simplified and centered manner, Don’t Forget to Follow us on our social media handles for updates. Thank You.